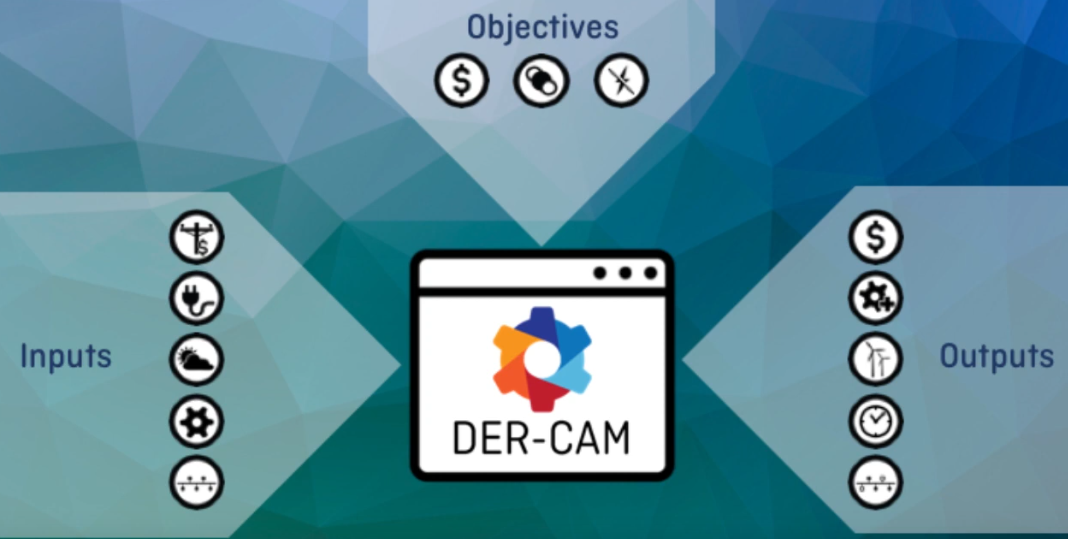 Two of those projects are from Berkeley Lab’s Energy Technologies Area:

Expand Access to and Scalability of a Microgrid Analysis Tool

The Distributed Energy Resources Customer Adoption Model (DER-CAM) is a decision-support tool to address research questions about the selection, sizing, placement and operation of distributed energy resource technologies and microgrids. A project with Microgrid Labs will undertake the foundational work of transitioning DER-CAM’s user interface and server architecture from its current prototype to a solution that addresses commercialization needs, such as those of energy consultants and utilities, as well as those of academic researchers for wider market adoption. The project, led by Nicholas DeForest, a principal research associate in the Energy Storage & Distributed Resources Division,  was awarded $200,000.

The growth of hydrogen-based renewable energy sources as viable alternatives to fossil fuel-based technologies depends on the development of materials that can significantly influence the efficacy of oxygen electrochemistry. One highly promising water-splitting device, the proton exchange membrane water electrolyzers (PEMWE), is limited by lower activity, high cost and instability in catalysts. A team led by research engineer Nemanja Danilovic in the Energy Conversion Group are partnering with Pajarito Powder, a catalyst manufacturer, IRD Fuel Cells, a membrane electrode assembly fabricator and Proton OnSite/NEL, the largest PEMWE company, to synthesize more efficient yet durable electrocatalysts for improved PEMWE devices. The project was awarded $300,000.

In addition, Jessica Granderson, deputy of research programs for the Building Technology and Urban Systems Division, is on a team that received a $250,000 award for the Sensor Suitcase. The idea for the Suitcase is for a user to install sensors throughout a building to gather data. The sensors are then gathered back into the suitcase and the suitcase is connected to a personal computer. The data is easily transferred to the computer, where analytical software automatically analyzes it and generates building energy-efficiency recommendations. The project team also includes Pacific Northwest National Laboratory, ​BC Hydro, ​GreenPath Energy Solutions, Sacramento Municipal Utility District, University of Idaho, and Zepher.

The fund also awarded $250,000 for a proposal, "Advanced Power Distribution Sensing and Communications Through the Cable TV Broadband Network," involving Berkeley Lab researchers Alan Meier and Sascha von Meier. Researchers on the project will examine use cases for the types, sampling rates, and resolutions of power measurements that would be helpful to electric utility distribution system operators in managing secondary distribution grids and distributed energy resources (DERs).

Finally, two projects from the Biosciences Area were awarded funding for research to:

Acetogenic Clostridium is considered the most efficient method of converting abundant low-cost gas feedstock into valuable bioproducts, but many Clostridium strains are difficult to engineer. A team at the DOE Joint Genome Institute recently developed a technology called chassis-independent recombinase-assisted genome engineering (CRAGE), which offers single-step genomic integration and prototyping of complex pathways. The team will be working with LanzaTech, Inc., in Skokie, IL, to adapt CRAGE for acetogenic Clostridium strains to enable rapid prototyping of complex pathways. The goal is to accelerate the cycle of commercial strain development for production of biofuels and bioproducts from low-cost synthetic gas and waste gas feedstock. The project was awarded $250,000

In this project, a team at the Joint BioEnergy Institute and Novozymes in Franklinton, NC, will combine their state-of-the-art technologies to cost-effectively produce a very promising biologically derived aviation biofuel precursor, isoprenol, from sustainable lignocellulosic biomass. Isoprenol is an intermediate for 1,4-dimethylcyclooctane (DMCO), which has been identified by the U.S. Navy as a promising aviation biofuel. DMCO has multiple performance advantages over Jet-A1, enabling jets to carry more passengers and/or freight per gallon using existing airframes, and to operate engines at higher temperatures and pressures for improved efficiency of new aircraft engines. The project was awarded $250,000.

The Technology Commercialization Fund program managed by the Office of Technology Transitions offers an opportunity for private industry to partner with DOE’s national labs to advance lab-developed energy technologies and intellectual property toward commercialization. The fund’s projects require that half of all project costs come from non-federal sources, including industry. More than $33 million was awarded to a total of 82 projects in this round. Read DOE’s announcement listing all recipients.